How did a Scottish Highlander come to live in Quebec and marry into my French-Canadian family?

When Thomas Cameron was born in the highlands of Scotland around 1740 the clans were still strong. Thomas was a child during the 1745 Uprising that culminated in the Battle of Culloden in April 1746. The Cameron clan supported the Jacobite rebels and their cause to place the Catholic Charles Stuart on the British throne. Being too young, Thomas didn’t take part in the battle, but his father John Cameron and other members of his family probably did. The clan chief, Donald Cameron, provided 400 of his own clansmen as soldiers, and they were considered some of the most elite among the Scottish fighting force. Sadly, the Jacobites lost at the Battle of Culloden, sealing the fate of the Highland Scots.

The Highlanders were considered a nuisance by the English. The Duke of Cumberland, leader of the English army, known to some as The Butcher, ordered his men to shoot wounded Scottish soldiers on the battlefield. Thomas Cameron and others who had ties to the Jacobites suffered severe persecution by the English, who swarmed the countryside in pursuit of any rebels or families who took part in hiding them.

Many of the clan chiefs had their castles destroyed and their lands forfeited. To break the Scottish clan and feudal system, it became illegal to wear a tartan (each tartan color represented their clan), to carry weapons or to play the bagpipe. Some of the Scots fled to other countries or were deported to the colonies, including Donald Cameron of Lochiel, the Cameron clan chief, who fled to France. Those who were rehabilitated had to swear an oath of loyalty to the British Crown.

One man who managed to avoid deportation was Simon Fraser, Lord of Lovat, who Thomas had a connection to through his mother, Marianne Fraser. When the war in America broke out, which we know as the French and Indian War in 1756, there was a great need for more British soldiers. Who better to recruit than the restless, brave, and battle-hardened Highlanders who were accustomed to rugged terrain and hard living? Fraser knew just who to turn to: his own clansmen. In 1757, he quickly rounded up around 800 volunteer men from his family’s former estates. Thomas Cameron took this chance, went into Inverness, and signed up ‘to take the king’s shilling.’

Why would Thomas agree to join the army of the people who were tearing his homeland’s traditions apart and persecuting his fellow clansmen? Many of the volunteers who joined were Thomas’s friends and relatives. There was not much left in Scotland for a young man to do and thoughts were already on seeking an escape. Joining the army meant decent wages, adventure, and a chance to prove himself on the battlefield. He was around eighteen years old, and he was off for his new adventure — never to return to his homeland.

The British regiment Thomas joined was named the 78th Highland Regiment of Foot, or Fraser’s Highlanders. They were enticed not just by money, for they were allowed to wear a kilt as their uniform, carry a broadsword, a dirk and a musket as well as play a bagpipe when marching into battle, recapturing the essence of their warlike traditions. The coat of their uniform was red,like the English soldiers. By the time the regiment embarked at Glasgow, they were around 1,500 men strong. They were shipped to Connecticut, where they spent the first winter.

The French had a strong military colony along the St. Lawrence River, stretching to the Great Lakes and into Louisiana, protected by a series of forts and through alliances with the native American tribes. This stronghold made it impossible for the English colonies to move westward and expand their territories. The British decided to attack two of France’s strongest points: Louisbourg in Nova Scotia and Quebec City.

At the head of the campaign to conquer the French in North America was General James Wolfe. After successfully seizing Louisbourg the year before under his command, the British troops landed via the St. Lawrence River on the outskirts of Quebec in June 1759. Fraser’s Highlanders had also participated in the Battle of Louisbourg and they came along to Quebec.

Wolfe was a young man, but bright. Thomas may have heard rumors that Wolfe, who had taken part in the Battle of Culloden and whose uncle was the Duke of Cumberland, had refused to kill a Scottish soldier, some say it was Simon Fraser, when his uncle ordered the man to be shot. As a result, Thomas and many of his comrades admired James Wolfe. The general, however, was not a well man and was growing impatient with the French. Physically frail, Wolfe suffered from an illness that he was told would kill him soon and which frequently kept him in bed. Wolfe was less afraid of dying on the battlefield than he was of dying without honor — he would find a way to conquer the French fortress of Quebec if it was the last thing he would do.

Around Quebec were small hamlets, each with its own parish priest and inhabited by farmers, merchants and trades people with their families. The French-Canadian colony was only 60,000 strong, but twenty-five percent of them were militiamen, and they had fifteen hundred native Americans who had pledged themselves to the king of France and would fight with them. The countryside consisted of large fields, that, during abundant seasons grew wheat, peas and corn. Unfortunately, the crop had failed that year and the population was dependent on supplies from France. Many were starving and ill.

Unable to break through the French defenses, Wolfe began sending his troops to plunder and ravage the countryside. I imagine that this was one element of war that Thomas didn’t agree with and that it sickened his heart to have to obey these orders. He had lived through the land clearances which were still going on in his homeland and would continue to for another one hundred years. He had witnessed the atrocities perpetrated by the British against innocent Scottish civilians. Now he had to do what he abhorred, burn homes and churches, pillage cattle, food and other supplies. Yet it was not without danger: Indians, along with Canadian militiamen, often jumped out from behind trees and attacked the small bands of soldiers, killing and scalping them. 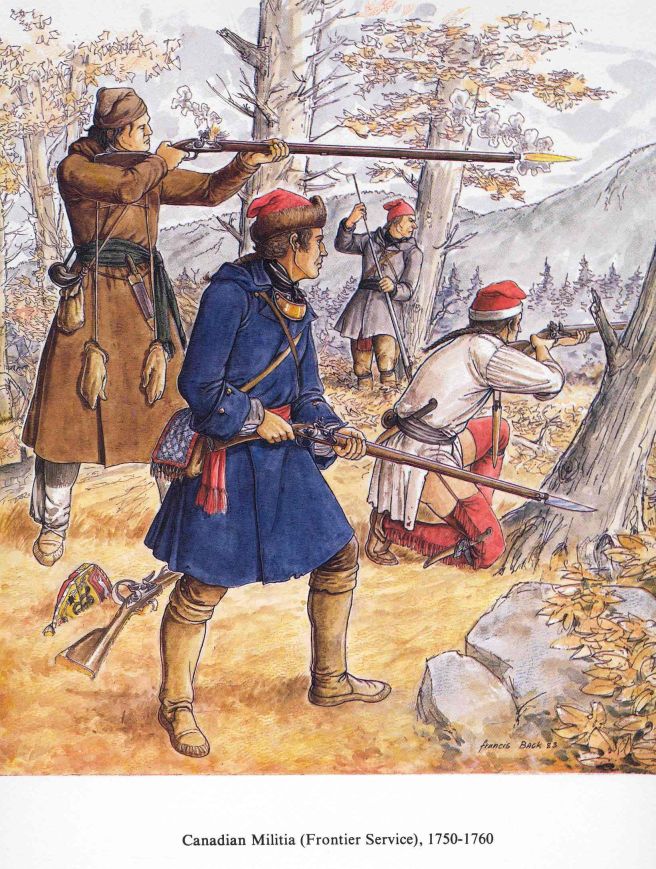 Early in September, Wolfe ordered the troops to land on the north side of the river, just above Quebec City. In the dead of night, three thousand British soldiers, among them Fraser’s Highlanders, crawled up the cliff to the Plains of Abraham and surprised the French who were expecting them further down the river. Within a quarter of an hour, the French army was defeated on the battlefield and retreated within the walls of Quebec. Several days later, they gave up the city in return for being allowed to withdraw their men upriver, which was granted. The stronghold of Quebec had fallen to the British.

Thomas Cameron and his fellow comrades stayed to guard the city and help maintain the British army’s tentative hold during the winter of 1759-60. Canadian winters being cold and brutal, and supplies already being scarce, the British military-governor sent men to collect firewood and purchase food and clothing from the inhabitants. Much of the town of Quebec had been destroyed, and an estimated 1,400 farm houses were burnt to the ground. Everyone was starving, the British soldiers suffered from frostbite, and many began to die from scurvy and other diseases.

Thomas and other soldiers who stayed in Quebec were lodged with the families who still had homes. One town, Beaumont, documented the kindness of Fraser’s Highlanders towards the French-Canadians. While housed with them, the officers and soldiers donated a portion of their salaries to give to the poor families. Thomas began to form relationships with some of these civilians.

While still at war, it was forbidden for a soldier to marry a woman from the enemy’s side of the battle. But in 1761-62, a year before the peace treaty with France was signed, he fell in love. The object of his affection was Marie-Françoise Roy, who was living in the parish Saint-Vallier with her parents and siblings. She was a French-Canadian. What were Thomas and Françoise to do? Against her parents wishes, and against his own commander’s rules, Thomas and Françoise nevertheless stood by one another and in August of 1762, their son Jean-Baptiste Cameron was born. The love affair brought scandal to the family, for the parish priest refused to perform a marriage ceremony for an enemy soldier. Even after the war ended, he maintained his refusal, as the couple had had a child out of wedlock and were “living in sin.”

After the regiment was disbanded in 1763, Thomas and other retired soldiers were offered the option to stay in Canada and settle, a deal Thomas accepted. Finally in 1772, eleven years later, the old priest died and the new one took pity on the couple. On 6 July 1772, Thomas Cameron and Françoise Roy were married and their son was baptized. They had six more children and lived the rest of their lives in Saint-Vallier.

Thomas had succeeded in his bold mission upon leaving Scotland. He had an adventure, proved himself on the battlefield, and found himself a happy home and bright future. And thanks to him, I exist. Thomas Cameron was my 5-times great-grandfather.

I am writing my family history. This site is all about the journey from not knowing anything at all about my family's history, to making it come alive. View all posts by Monique